You might have already read or heard many times from SEO experts that loading speed of a WordPress site (or any website) is important. And they have also told you it may result in better SEO, traffic and more ad clicks or more sales conversion, etc.

If blogging is the only way for you to earn money then this is an important aspect for you to focus.

Well, this is something that cannot be shown theoretically and needs to be shown with real data, which is the most difficult part.

Of course this is true, but I have not seen a detailed analysis done by anyone. If you saw something, please leave a url so that I can look into that as well.

Some have tried to show the impact of a speed website but they show traffic rise which took months. Nothing wrong, but there could have other factors influenced the traffic increase, so, it is hard to justify especially to the beginner or amateur bloggers!

But what I have implemented to increase the WordPress page load speed and the data I captured shows a next day increase in ad clicks, reduced bounce rate, more number of pageviews, faster response to Google crawl requests etc. and hence better SEO.

For a fair comparison I have selected two such days where the number of visitors are exactly same, there by showing how the other metrics have changed because of the speed of the WordPress site, so that anyone can understand what am I really talking of.

In this article I will show you how a small server-side caching implementation resulted in increased number of AdSense ad clicks, more page views, lower bounce rate (which is nothing but better SEO) etc.

I will explain the exact change I made but before that let’s look at the data that shows the impact of this change.

I configured Varnish caching on my dedicated server hosting on 28th January 2021. As I said earlier, I will chose two dates before and after this change which will have exactly the same number of visitors.

So, the dates chosen are 25th Jan and 28th Jan where the number of visitors is almost the same. Having said that, let’s look at what will you get if you can have a faster website.

A fast WordPress site has resulted in the following things:

Let’s look at the real data of all the above said points one by one.

Since the day when the server side varnish cache was implemented, the average server response time has gone down. In this case lower is better.

On December 25th the average page load time was:

The average page load time has significantly reduced after the Varnish cache is implemented:

[alert-warning]Note that this is the average page load time which is still higher. A website very well setup to perform faster for all geo location may have even lower response time.

The purpose of this demonstration to show that a simple server side caching with Varnish yields drastic results.
[/alert-warning]

When a page loads faster, visitors tend to view more pages in a single visit.

For a fair comparison, I have chosen two dates before and after the change that have almost the same number of visitors but have more number of page views.

The first image shows the number of visitors and number of page views on December 25th. 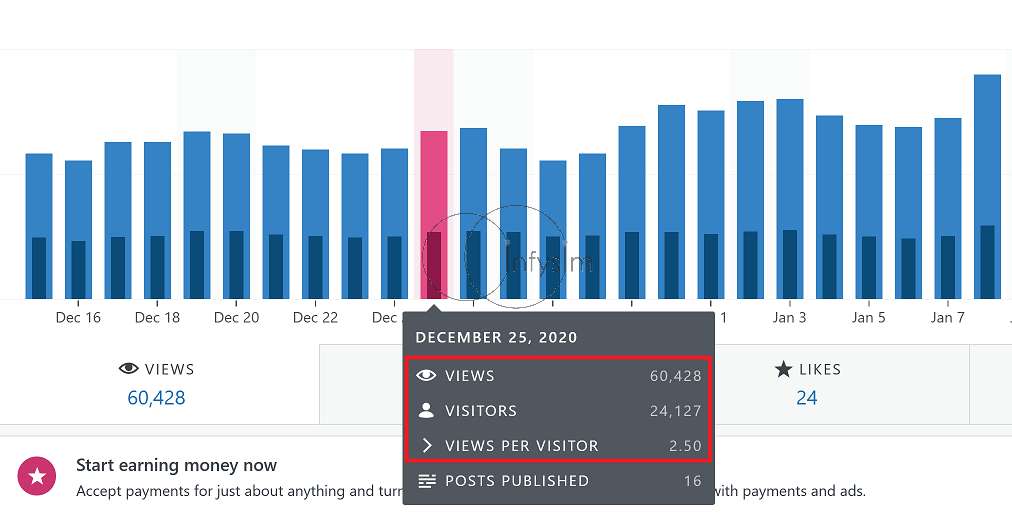 The second image shows the number of visitors and number of page views on December 31st after the server side caching is implemented.

For the same number of visitors I have got 15% more number of page views. When a visitor reaches to your website from Google or other referral sites, and then bounce back from your website, that is counted as the bounce rate.

Let’s say, out of 100 visitors to your site if 80 people leave your site then the bounce rate of your site is 80%.

When you have more number of views per visitors, that clearly means less bounce rate of your website.

The first image shows the bounce rate on December 25th. The first image shows the bounce rate on December 31st after the caching change is implemented. Again for the same number of visitors, 5% more visitors stayed back on the site to explore more.

When the WordPress site loads faster, we saw that resulted in higher number of page views and lower number of bounce rate.

If you have a fast website then of course the conversion rate will be more. Well, this is the most important part of this whole presentation.

Look at the number of AdSense ad clicks on these days:

The first image shows the number of on December 25th.

The second image shows increased number of ad clicks and number of page views on December 31st after the caching change is implemented.

That is straight 11% more ad clicks than the slower website. Basically I was just losing this money for no reason.

[alert-warning]Despite having more number of clicks the earnings are almost the same on these days.

If you want more ad revenue from the existing traffic, then visit this page where I have explained how I increased my AdSense earning by changing Ad placements.

Last but not the least, crawling is an important aspect for SEO. Crawlers love websites that loads faster.

The data I have that only shows that after the caching implementation the crawler response time has also decreased.

This may have resulted better crawlability of the site but again I do not have sufficient information to show this.

Finally, these are the things we got from the server side caching setup:

This data clearly shows how a properly configured server side caching results in more page views and more earning, that too almost instantly.

Now that you know the impact, let’s just look at the setup of the server in discussion and what exactly changed in the hierarchy that made this happen.

The WordPress Server Setup Before and After the Caching Change

Usually bloggers or business owners do not care much on this because they choose managed hosting services which is typically managed by the service provider.

But this plays an important role in your blogging or business.

I have been blogging since 8 years and I have changed dozens of hosting services from Dreamhost, InMotion, Bluehost to Cloudways before I decided to manage my websites on my own to save thousands of dollars every year.

To understand how the change made such an impact, you need to understand what really changed in the server setup.

The WordPress Server Setup Before Change

Before I made the change, the setup of the hosting looks quite simple as below:

Any requested url from a visitor will go through the below sequence.

The request first reaches the actual server which is either Nginx or Apache (in most case) then it is sent down to the PHP via the index.php of your WordPress site to process php code and then relevant requests made to MySQL to fetch database content to fully build a single URL requested by a user.

Now the whole process will obviously take significant amount of time depending on many variable factors.

That’s why we put caching in between different layers in this hierarchy.

Now let’s look at what I have added in this setup that really helped in improved load time which in turn resulted in better revenue.

The WordPress Server Setup After Change

A single request to load a url results in processing from many components in a server in reality. To respond faster, queries made to the same url is usually cached in different layers in the server setup.

In the new setup, I introduced Varnish caching that sits even before the actual server software which is Nginx or Apache that caches the output of the server for a url requested.

Below is the new hierarchy of the server setup:

Basically, Varnish caches any response that comes from Nginx or Apache if it does not have.
If varnish already has the cached data, it does not call the lower components at all, hence saving a lot of processing time.

So, only the first request to the server will take longer time to process but all other subsequent requests will be directly responded by Varnish caching layer.

How Do you Get the Same Result From Varnish Caching?

I manage my own servers since 2018, hence I added and configured varnish by myself.

Managing your own server is not recommended to everyone, because, it is not an easy task unless you have the expertise on Linux.

I am a software developer who worked with Linux for 10 years hence dared to put my hands in managing my own servers.

But, if you want the same result on your website, then you have to do one of the following:

How Was I Able to Achieve a Faster WordPress Site?

I turned off SSL on my server. Yes, this is one of the biggest reason why Varnish responds faster on my server.

My server does not respond on 443 or https. Basically I use Cloudflare to handle the https thing for my website(s).

So, the SSL thing on my website comes from Cloudflare and not from my own server thereby reducing a significant amount of SSL certificate load time on my server.

[alert-note]This might sound contradictory as everyone is recommending to enable SSL, right?

This is a little bit of technical. I will write another post to show how SSL affects the page load time of a site and why you need to avoid this if you are already using Cloudflare or Ezoic etc.
[/alert-note]

And, with Varnish, the fast just got faster.

As far as I know, Varnish works only on port 80. It does not work directly with SSL.

If your server has SSL configured, then you need to configure the server to send it’s backend to varnish and then varnish will send the request to another http server below it.

You have seen how a fast website can bring you more loyal visitors and can earn you more money.

But what you missed from this whole article is that, “Knowledge is power”!

The knowledge that you knew was there but never witnessed.

This is not a kind of article you see it everywhere. I bet this is different and more ligical and data driven than everyone else is saying you about WordPress, speed, Revenue, SEO etc.

I have just started to share the things that I have learned over the period of time which I am sure will help you succeed in your bloggin or affiliate marketing journey.

Stay with me to get the